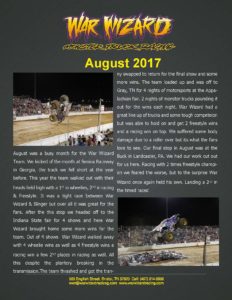 Here we are at the half way point of the year! The
War Wizard team is full steam ahead. June was a
busy month, we kicked it off in Jackson, TN at the
truck & tractor pulls. This was the debut event for
our new driver RJ. He did not let the pressure get
to him. He came out big on Friday & Saturday
night and gave the fans a show despite minor
issues both nights. The team worked fast to get
the War Wizard back up to 100% to return for
encore runs. The fans were ecstatic with the new
driver. After a great weekend in Jackson the team
regrouped and prepaired for displays at Bristol
Motor Speedway and the tear down of the truck
for much needed tlc. Next Stop Bristo

As April end and May began the War Wizard Race
Team was busy making changes to improve the
team. We spent many of hours testing a new
driver and getting him ready to make his debut in
Jackson, TN in June. Along this journey we were
able to make a young mans birthday unforgetable.
Kaden received a special gift from his grandpa
which was having War Wizard at his party and
have a little freestyle showdown. As you can see
in the pictures not only did our new driver have a
good time but the kids “LOVED IT” too. We have
not formally announced our new driver yet, having
said that Randy Moore and the the management
would like to introduce to you RJ Turner, this
young man just turned 24 years old and has been
in motorsports since he was born. As per Randy
Moore’s words “He is a natural” We are very please
to welcome RJ to the team and look forward to a
great summer line up and super excited for the
future of War Wizard Racing.