Friday night we earned the feature win at ACE Speedway with an outstanding performance by the entire team. As Randy Dorton used to say the car unloaded fast (took me awhile to figure out he was not talking about unloading the trailer). In first practice the car was slightly tight in the center and a tick loose off. Jason made a few small adjustments that turned a good car into a great car that I was able to set fast time with. With another adjustment and a great starting spot we were able to jump out to a commanding lead and put a straight away on second place. Mark did a great job as usual spotting keeping me clear of the lap cars and caution flag. If feels great to get to this point, it has not been easy at times but with all your help, support, and friendship it is worth the effort.

We also pulled double duty running Saturday night at Orange County speedway where we qualified 4 and finished 4th. It was not that boring, some knuckle head drove across the right front before we even took the green about spinning us out. So we had to work our tails off to get that 4th with a bent right front wheel. Orange County is a very high banked fast joint where you run the top groove. I really like it a lot but don’t have a bunch of laps there and am still competitive, I see us doing well there in the future as well.

And as if I did not have enough excitement this weekend I stopped and helped some drag racer who had two trailer flats at one time and gave him my spare.
I have been in that same spot and someone helped me so tonight I got my chance to pay it forward.

I want to send out a special thanks to ARP fasteners for help with some quality parts for the engine build in process. Sam Benson and the staff at ARP make first class fasteners for Hendrick Motorsports engines so you know they are more than good enough for garage builds like mine 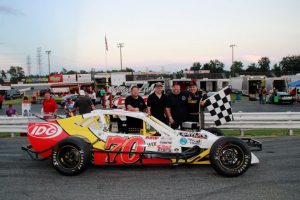