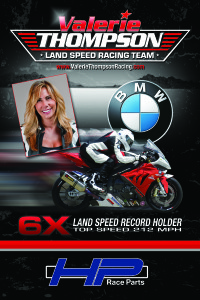 Woodcliff Lake, NJ – June 30, 2014…Six-time motorcycle land speed record holder and one of the world’s fastest BMW racers, Valerie Thompson, will make a guest appearance at the 14th BMW Motorrad Days celebration July 4-6 in Garmisch-Partenkirchen, Germany.  The biggest BMW party of the year is expected to draw over 40,000 motorcycle enthusiasts from around the world.

Thompson will join fellow BMW racing legends in the Classic Tent, which will highlight “90 Years of Championships and Titles,” beginning with the BMW R 37 at the first German Championship in 1924 through the first AMA Superbike victory on the BMW R 90 to the recent successes achieved on the BMW S 1000 RR.  In June, Thompson set her 6th land speed racing record at the Ohio Mile with a blistering speed of more than 208 mph on her BMW S 1000 RR, shattering the previous record and becoming the newest female member of the prestigious ECTA 200 MPH Club.

“I’m thrilled to be invited back to BMW Motorrad Days,” says Thompson, who is making her second guest appearance as a visiting American VIP racer.  “It is an honor to be included among such accomplished riders. Last year, I had a fantastic time meeting terrific people, riding a GS up and down some steep terrain, eating lots of great food and joining the festivities at night.”

When Thompson returns to the U.S., her sights will be set on shattering a new record at the prestigious Bonneville Speed Trials in August and joining the Southern California Timing Association’s (SCTA’s) “Bonneville 200 MPH Club.”  After that, she’ll attempt additional land speed records at El Mirage and the Texas Mile.

“My goal is to get into every single one of the 200 MPH Clubs with my BMW S 1000 RR,” remarks Thompson.  “Since purchasing the bike in January 2012, it has taken my career to a new level. I feel one with this bike, like I’m practically the paint. We are definitely a match made in high-performance heaven!”

When asked whether she considers hanging up her leathers anytime soon, the American Queen of Speed replies, “I’ve never given much thought to hanging up my helmet. With a little help from BMW, I plan to keep going faster as long as I can. There are always new records to break, even if they are mine.”