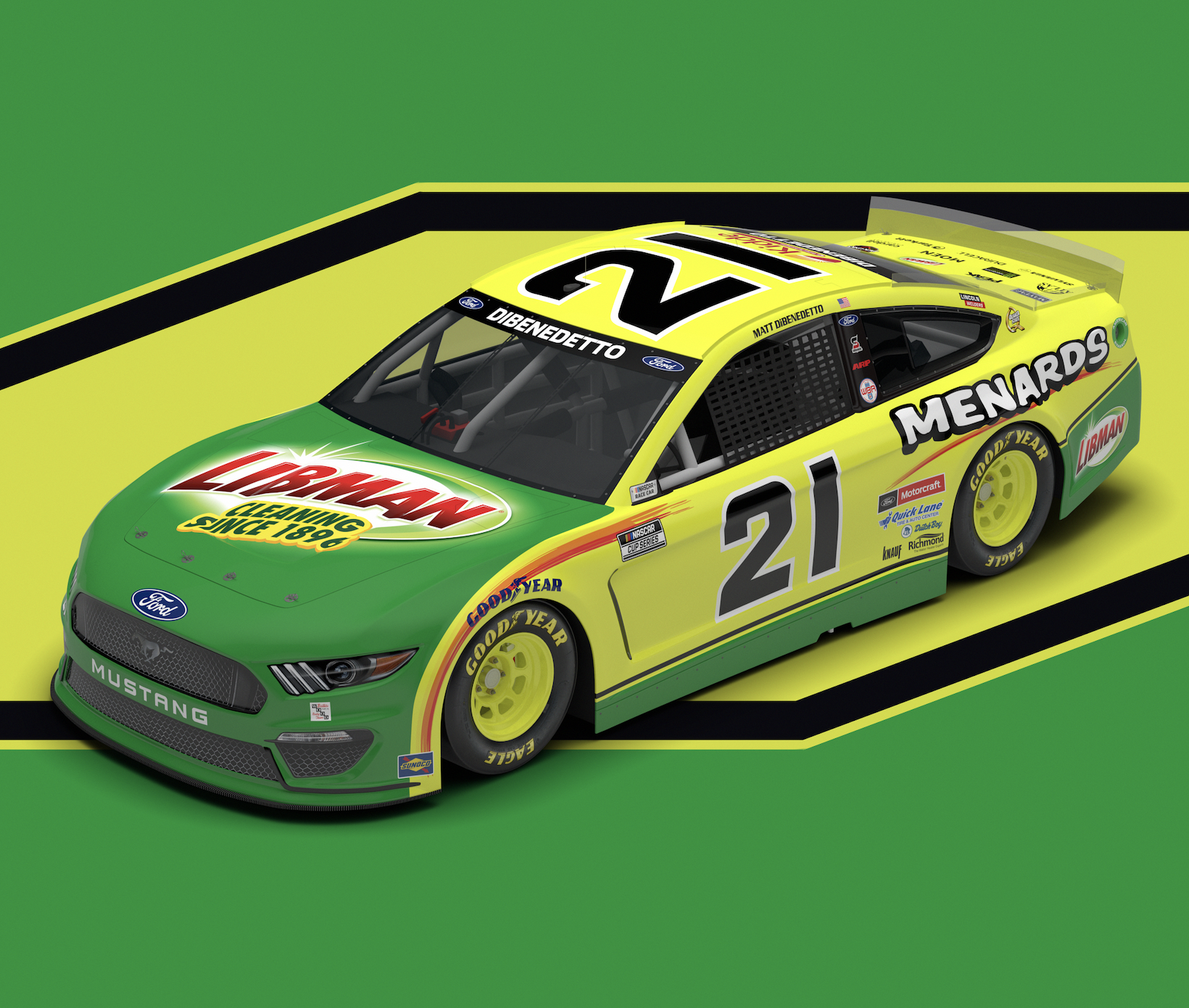 For Matt DiBenedetto and the No. 21 Menards/Libman team, a third-straight short-track race is just what he says they need to continue climbing up the Cup Series standings.

“The biggest thing I’m excited about is it’s a short track,” he said. “Our Menards/Libman Mustangs have been the strongest on the short tracks.”

He’s also looking forward to putting to use some of the information he and his Wood Brothers team gathered last fall at Richmond.

“We tried some things and learned a lot,” said DiBenedetto, who is set to start 16th on Sunday. “I feel really confident as far as coming up with a set-up that gives me what I need out of the car.”

Then there’s the alliance between the Wood Brothers and Team Penske, which won the most recent Cup race at Richmond with its No. 2 team and driver Brad Keselowski.

“Brad was really fast in that race,” DiBenedetto said. “Our alliance with Team Penske is really helpful. We can learn a lot from that.”

After a disappointing start to the 2021 season, which saw the No. 21 team finish outside the top 30 in the first two races, there’s been a steady climb. DiBenedetto and the team have climbed 15 spots in the points standings to 22nd, largely on the strength of five consecutive finishes between 11th and 16th.

“We’ve been able to come up in the standings even with some crazy circumstances thrown at us,” he said. “We’ve overcome tons of adversity and put together some OK finishes, even though our finishes are still not reflective of how good a race team we have.”

DiBenedetto said it’s important to remember that even though he and his team have had some bad luck this year, other drivers and teams have had more misfortunes.

“It just shows how tough this sport can be,” he said.

Sunday’s 400-lap, 300-mile race is set to get the green flag just after 3 p.m. Eastern Time, with no pre-race practice or qualifying. There will be Stage breaks and Laps 80 and 235. FOX will carry the TV broadcast.

The stout performance marked the fifth consecutive podium performance for Scelzi, who now has seven podiums in his last 10 races.

“This is definitely the best start to a year I’ve had,” he said. “I feel like we’re hitting on all eight cylinders. I feel like as a race team we’re building on every night since we started this year.”

The night featured a twin heat race format with Scelzi maneuvering from sixth to third place in his first heat race before he finished fourth in his second heat race.

“I felt like we’ve been really good the last month,” he said. “We went there with the goal to try to learn something. The track had a little more grip than usual. We were trying some stuff to make us better when the track is fast. We were pretty good during the first heat race and tried something for the second heat race. It was the wrong move.”

The heat race runs ranked Scelzi 10th in points to narrowly miss the dash and line up on the outside of the fifth row for the main event.

“We tried something different for the main event,” he said. “On the outside row it’s really hard to start, especially that far back. We fell back and I got to the bottom. I was able to run my own race. A lot of guys moved to the top and we were really good around the bottom. We worked our way to second late and were extremely fast at the end of the race. We weren’t exactly where we needed to be, but we were good enough to go from 10 th to second.”

Scelzi is set to make his season debut at Ocean Speedway in Watsonville, Calif., this Friday.

“We haven’t been on super short tracks this year so I’m looking forward to this weekend,” he said. “I’m hoping Watsonville will have a little more grip than what I’ve seen the last two weekends. We’ve had success at that track in the past so I’m excited to make our season debut there this weekend.”

Rookie In Red: Bruening eager to make most of full-time World Of Outlaws tour attempt

The Decorah, IA driver is tied for fourth in points after 10 races

CONCORD, NC – April 13, 2021 – As the World of Outlaws Morton Buildings Late Models swing through the month of April, another driver has joined the Series full-time.

Tyler Bruening is the latest addition to the 2021 tour, signing on after maintaining a top-five points position throughout the early stage of the year.

Joining the full World of Outlaws tour for the first time is something that gives the Decorah, IA driver a sense of accomplishment.

“It’s a dream come true,” Bruening said. “When we first started, we never dreamed of making it this far.”

Running the full Series schedule wasn’t originally part of his plans in 2021. But after a few good runs, Bruening and his team had to take a closer look.

“It’s just gone so well, and we’ve been running so strong that we really had to re-think what our plans were for this year,” he said. “That’s when we decided to jump on board.”

The Bruening team has the opportunity to take a different approach when they enter the racetrack. They’re the only ones with a true teammate on tour.

The Skyline Motorsports team consists of Bruening, and 2015 Series Champion Shane Clanton. Bruening understands the importance of having “The Georgia Bulldog” next to him in the pit area every night.

“A lot of times we go to tracks I’ve never been to, so that’s when it really comes into effect,” Bruening said. “He’s been all over the world, so it helps out a bunch.”

He’s also getting advice from Clanton on what to do inside the car, like keeping an eye on track conditions throughout the night.

“It’s really helped me progress by taking away that learning curve, so it’s been a huge advantage for us and we’re just trying to use it the best we can,” Bruening said.

As the World of Outlaws Morton Buildings Late Models get into the meat of its 2021 schedule, there’s a few tracks the Hawkeye State driver looks forward to visiting. That includes a couple close-to-home races next month.

“We’ve got Boone [Speedway] coming up here in a couple of weeks, and [Mississippi Thunder Speedway] is one that’s up around the house,” Bruening said.

“I haven’t really raced [Mississippi Thunder] much but I’m excited to race around home. It’s just so my family and friends that normally watch on TV can come see us in person and experience the race firsthand.”

While any driver that runs the Series wants to win a championship, Bruening has a goal of staying consistent.

“Last year was pretty up and down for us,” he said. “We had pretty good speed all year, I just feel like we had bad luck.

“I really just want to be consistent and rack up those top-10s, be competitive and finish strong throughout the season.”

After 10 races this season, he’s finished in the top-10 five times. Through his career with the Series, Bruening has made 35 starts and collected two top-fives and 11 top-10s in total. He’s still on the search for his first win, though.

Bruening is currently tied for fourth in the points standings with Kyle Bronson, 72 points behind three-time and defending champion Brandon Sheppard. He’s also in the hunt for Rookie of the Year, trailing Kyle Strickler by 50 points.

You can see Bruening and the rest of the World of Outlaws Morton Buildings Late Models at Richmond Raceway in Richmond, KY April 23, and Brushcreek Motorsports Complex in Peebles, OH April 24.

With one of his strongest starts to a season, Cruz Pedregon and team are third in the NHRA Funny Car standings and ready to get back on the track this week in Las Vegas in front of a sold-out crowd.

“We’ve got good data and the confidence of going to the semis our first time out with this new team that will give us the momentum we need to do well at The Strip at Las Vegas Motor Speedway,” Cruz says. “John Collins has had cars he’s tuned in the final rounds at both of the previous Vegas four-wides, so we’re eager to give it our best shot.”

The Snap-on Dodge® piloted by Cruz is already seeing consecutive 3.9 runs, a tribute to the hard work being done to get it right early in the season and stay in the groove. 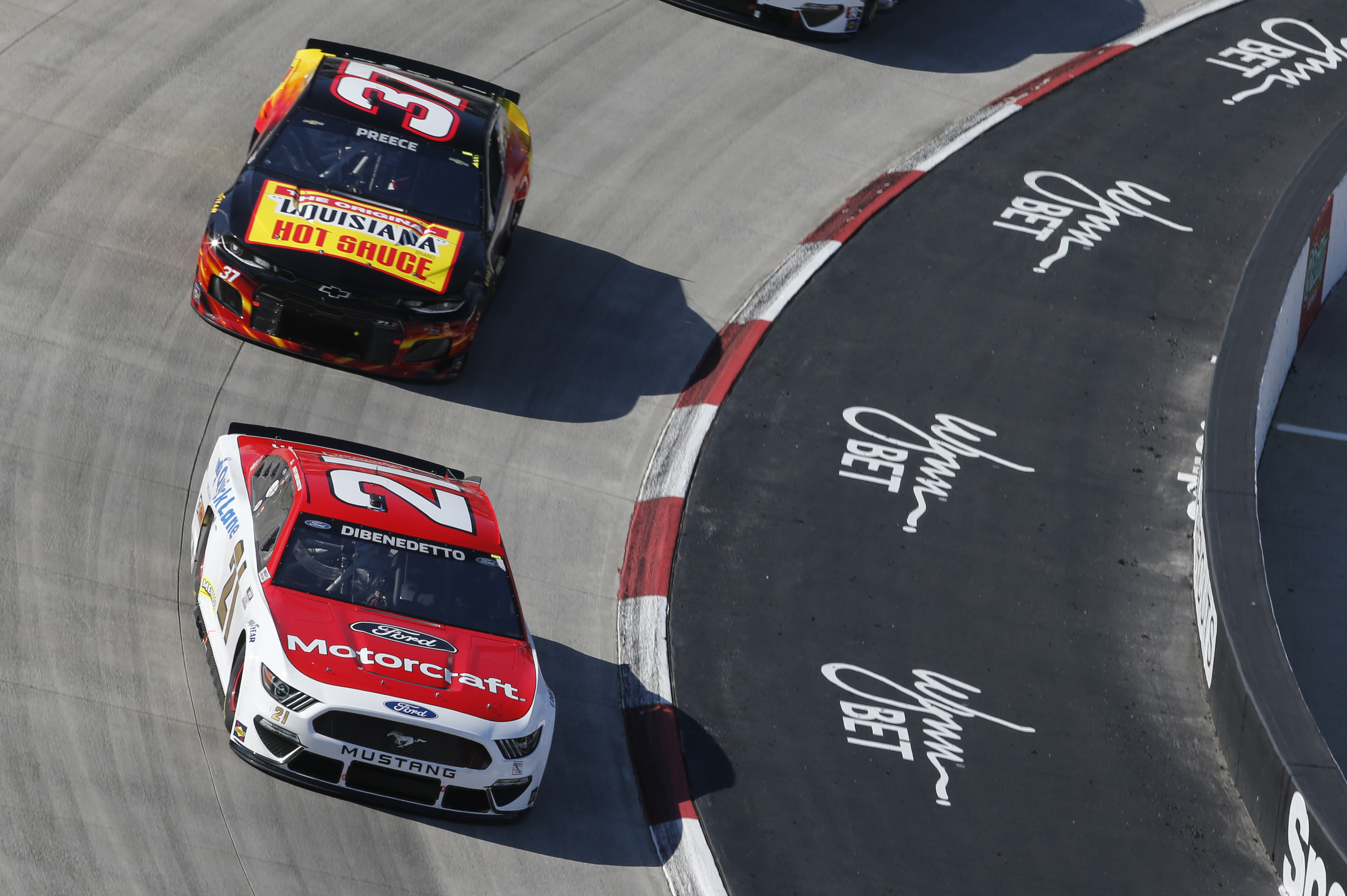 Matt DiBenedetto and the Motorcraft/Quick Lane team rallied from a mid-race incident that resulted in significant damage to the No. 21 Mustang and came home with a 12th place finish in Sunday’s Blue Emu 500 at Martinsville Speedway.

DiBenedetto started the 500-lap race from 22nd place on Saturday night, and had moved to 15th place when rain halted the race after just 42 circuits.

When rain continued into the night, the race was postponed until 4 p.m. on Sunday. When the action resumed, DiBenedetto and the Motorcraft/Quick Lane team showed good speed and were running 13th at the end of the first 130-lap Stage.

In Stage Two, he continued to run just outside the top 10 until the closing laps when he was unable to avoid spinning drivers ahead of him. The contact crumpled the right front fender of the Motorcraft/Quick Lane Mustang, with damage also to the splitter and the front sway bar connection.

Quick work by the Motorcraft/Quick Lane crew led by Jonathan Hassler, filling in for Greg Erwin who contracted COVID-19, allowed DiBenedetto to rejoin the race in 26th place, just one lap down.

He drove his way into the free pass position and rejoined the lead lap when Kyle Busch and Chris Buescher spun as they raced beside him with 178 laps remaining in the race.

Back on the lead lap, he continued to work his way forward, and was able to avoid several accidents. He also steered clear of significant damage when 11 drivers piled up on the backstretch with 114 laps remaining, bringing out the red flag.

When the green flag was displayed again, DiBenedetto was able to move from 16th place to 12th at the checkered flag. It was his fourth straight top-15 finish.

“Our Motorcraft/Quick Lane Mustang was pretty good to start with,” DiBenedetto said. “It had a lot of potential. It could have been a pretty big day for us.”

Then came the damage.

“When Ryan Newman spun in front of me, I just didn’t have anywhere to go,” he said.

But what might have been a disappointing day turned into one to be proud of.

“To come from getting all that damage and losing a lap to getting the lucky dog [free pass] and getting back on the lead lap and finishing 12th was pretty impressive,” DiBenedetto said. “Nobody on the team gave up. Everyone just kept grinding away at it, and we wound up with a decent finish.”

Part of that success included DiBenedetto dodging numerous crashes, many of which occurred just ahead of or beside him.

Next up for DiBenedetto and the No. 21 team is a Sunday afternoon 400-lapper at Richmond Raceway.