Brenda Grubbs Motorsports left Magnolia, Texas to head to the Denver National event on Tuesday, July 17. After Denver, plans were to hit the Topeka Double Header Divisional race on the way home. The grass was mowed, mail held, and the motorhome was packed with enough clothes and food for two weeks. An extra suitcase was packed for Brenda as she had a business trip to Costa Rica scheduled the day after Topeka.
With everything packed, the only thing missing was the Stocker. After yet another failed dyno attempted, it was decided new pistons were in order. With this new discovery, the motor was not available for the Denver or Topeka events. END_OF_DOCUMENT_TOKEN_TO_BE_REPLACED

The Atlanta National event was fun as numerous racers congratulated us on the recent Houston win. Unfortunately, the race results weren’t nearly as spectacular! Super Stock resulted in a first round loss and Stock, a second round loss.
The Topeka National event was another solid showing for the Super Stocker, making it to the quarter finals before losing to the event RU, Gary Stinnett. The Stocker didn’t make it to round one. During Class Eliminations, the motor came to a screeching halt a 7500 RPMs around the 1,000 foot mark. It was quickly determined the timing chain broke which is disappointing for a motor with limited runs.
The weather was typical Topeka. Friday was sunny and hot and Saturday and Sunday were rainy. The pros were able to get a few runs in over the weekend, however first round of Sportsman was held Monday morning. Thankfully, Brenda’s work schedule was flexible. Her flight to Minneapolis was rescheduled for the evening and meetings rescheduled for the next day. Bill, unfortunately, had to make the journey home alone, traveling late into the night to ensure he would make it to work later the next day. Sometimes, it’s hard to balance work and racing! END_OF_DOCUMENT_TOKEN_TO_BE_REPLACED

Brenda earned her first win in Super Stock at the 2018 NHRA Spring Nationals in Houston, Texas. The car debuted last year but only competed for half a season due to engine problems. To earn a win in Super Stock after only a short time is a dream come true.

After five rounds, Brenda squared off against Craig Gualtiere in the final round. Airing live on FS1, Brenda left the starting line with a .014 reaction time and never looked back. The National Parts Depot Super Stock Camaro crossed the finish line in 9:28 seconds, at 138 MPH. END_OF_DOCUMENT_TOKEN_TO_BE_REPLACED

Ennis
Divisional Event 12-15 Apr
Houston
National Event 20-22
Apr
Atlanta
National Event 4-6
May
February Testing:
We tested in February with Pro Stock bike racers Matt and Angie Smith at Bradenton Motorsports Park. This was our second pre-season test trip to our old home track where the weather is generally great and the track is fantastic. The trip is worth the drive as the staff hosts several off-season professional test sessions and they go to great lengths to ensure customers are happy.
END_OF_DOCUMENT_TOKEN_TO_BE_REPLACED

While the trip to Denver didn’t result in a Wally, it was an experience! We exited first round in Super Stock and second round in Stock. After the race, we took a few days to enjoy the area however, not before heading up the mountain with the race rig encountering 9+% grades. Our Super Street friends made the campground reservations near Central City, CO without investigating the travel route. Note to self: Never follow your friends blindly!

From the campground, we left for the Topeka double header divisional race, driving down the mountain at 4:30 am in the dark, and that was only the start of the drama for the trip. Our SS Goodyear tire test session was rained out on Thursday and Bill had a tire blow out on our pit bike. After calling every motorcycle/powersports store in Topeka, Bill unable to get a spare tire had to resort to plan B for the weekend; riding my bicycle. END_OF_DOCUMENT_TOKEN_TO_BE_REPLACED

Atlanta National Event – May
The Atlanta event was plagued by rain, resulting in only one qualifying shot. We lost in the first round of Stock and the second round of Super Stock. As the second round of Super Stock was held on Sunday, we did race in front of a large crowd. Unfortunately, when staging, we weren’t quite lined up in the groove. When the car launched, it headed straight for the Christmas Tree. Brenda was able to regain control of the car and prevent contact with the tree. Adding insult to injury Brenda recorded a perfect light .000 against the always tough Kevin Helms.

Topeka National – May
Topeka was yet another cold and dreary race. We lost in the first round of Stock and third round of Super Stock.

Great Bend Divisional Event – June
While the weather was finally nice, during the first round of qualifying we broke a valve spring in the Super Stocker and had to sit out the remaining qualifying runs and eliminations. To further add to a tough weekend, we were headed home after a first round loss in the Stocker. Getting home early however, allowed us to pull the motor in the Super Stocker and get it to Sherman Racing Engines for repair.

Disassembly revealed not only a broken valve spring and two bent valves, but also severely damaged lash caps (all were cracked, worn and deformed). The good news is the damage was limited to the top end of the motor. And we will be back out for the Denver national event.

July Racing
We are looking forward to returning to Denver where Brenda won her first NHRA National event in Stock Eliminator. To compensate for the altitude difference, a taller gear has been installed in the Stocker. The Super Stocker will once again be ready to rumble.

The weekend after the Denver national, we will attend the double header divisional race in Topeka.

The links below are to an interview done at the Houston National event earlier this year. The interview focuses on the cars and is also featured on The Road to My Ride website and YouTube.

The column featuring Division 2 Super Street drivers Mike and Ernie Griggs is featured in the June 30, 2017 issue of National Dragster. Another article has been submitted for publication and still another is progress. It’s great to hear how much racers enjoy the articles and appreciate the publicity of Sportsman drivers. 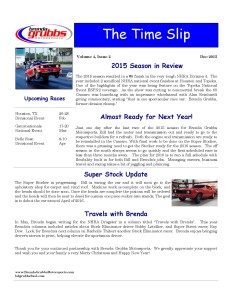 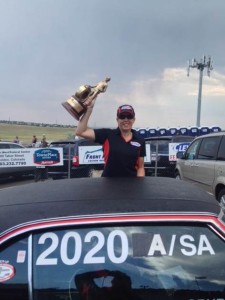 2012 resulted in two wins and a 5th place finish in NHRA Division 2 Stock Eliminator. The year’s first win was a class win in C/SA at the NHRA Jeg’s Cajun Sportsnationals. This was the first NHRA Class win for Brenda since 1999. Brenda does not normally like to show her hand during class elimina-tions, as she likes keeping our Class competitors in the dark as to how fast the car can really run. Then after hurting both 396ci C/SA engines (both with crankshaft issues), the 427ci A/SA engine was back in the car after two years of storage. Without a test ses-sion and using notes from previous runs from Atlanta in 2010, the 427 per-formed flawlessly with no drop off in performance. At the very first race with the 427, Brenda claimed her second win of the year (Atlanta NHRA Divisional) by crushing her opponents both at the starting line and at the top end.
In addition to two wins, Brenda com-peted in her first two Super Stock races at the NHRA Divisional Race in Valdosta, GA and the NHRA Jegs Cajun Sports Nationals. Thank you to Pat Clifford for allowing us this op-portunity. It was an invaluable ex-perience. What the team learned about Super Stock and running two cars will pay dividends in the future.

Division 4, Here We Come!
Brenda Grubbs Motorsports is moving to Houston, Texas!
Brenda was recently promoted to a National Account Manager at General Mills. Brenda will handle the Sysco ac-count headquartered in Houston, TX. Sysco is one of General Mills’ largest customers in the foodservice division. Brenda started with General Mills in 2006 and has been promoted numerous times. In 2010, she received the “Ring of Excellence” Award given to the top salespeople at General Mills.
The prospect of racing in a new division is very exciting for Brenda. While there are many great racers in Division 4, Brenda Grubbs Motorsports has historically had great success when attending races in the South Central Divi-sion. Both Brenda and Bill are excited about moving to Houston and look forward to racing in the South Central Division. Brenda Grubbs Motorsports

Super Stock Update
The week following the Charlotte 4 -Wide Nationals, B&B Race Cars started work on our ‘69 Camaro Super Stocker. Cutting out the complete floor and trunk pan, as well as the front and rear clips, the car became a shell of its exterior sheetmetal. A new OEM front subframe has been installed and the car is progressing. A B&B 4-link with Mark Williams parts will be installed shortly.

On Track Testing
Coming out of the water box for her first qualifying pass at the Bristol event, Brenda broke the crankshaft on her primary 396ci engine. With the spare 396ci engine also down for a cracked crankshaft, it was put in the spare-to-the- spare
427ci engine or sit out the next several races. The 427 went in. As we had no carb setup for the 427 we consulted with Scooter at QuickFuel Technology. With his guidance we settled on metering blocks, airbleed and jet changes. The scheduled
test session for Penske shocks was put on hold for chassis and setup testing at the Atlanta divisional. This test session was then scrubbed due to technical difficulties and an injury to Bill. Qualifying went better than expected with corrected et’s the
best we had seen for the 427. Then going against our usual regimen of not making changes during an event, a change was made for the last qualifying pass. The car responded to the change and we netted a reduction in et of .111 seconds. The 427
turned out to be a consistent combination even when track temperatures exceeded 140 degrees. Goodyear tires really put the power to the ground!

Brenda drove her 1969 Camaro through four rounds of eliminations at the NHRA Jegs Cajun Sports Nationals in Belle Rose, Louisiana to claim her second NHRA Class Win. With nine cars, C/SA was one of the largest classes. In the main eliminator Brenda went to the second round when after treeing her oppo-nent by over a tenth, the engine broke a 9/16 inch exhaust rocker arm stud followed by an intake rocker arm. Brenda wisely con-ceded the race to prevent more damage.

As you can imagine, living in the south, our off season is very short. It seems like we were just at the NHRA Divisional Race in Reynolds, Georgia. But, of course that was last October!
Our first race of the season will be the NHRA Divisional race in Orlando, Florida on February 10th. The weekend after, we head to the Gainesville Divisional Race. Then it’s a weekend off, followed by the Valdosta Divisional and the GatorNationals.