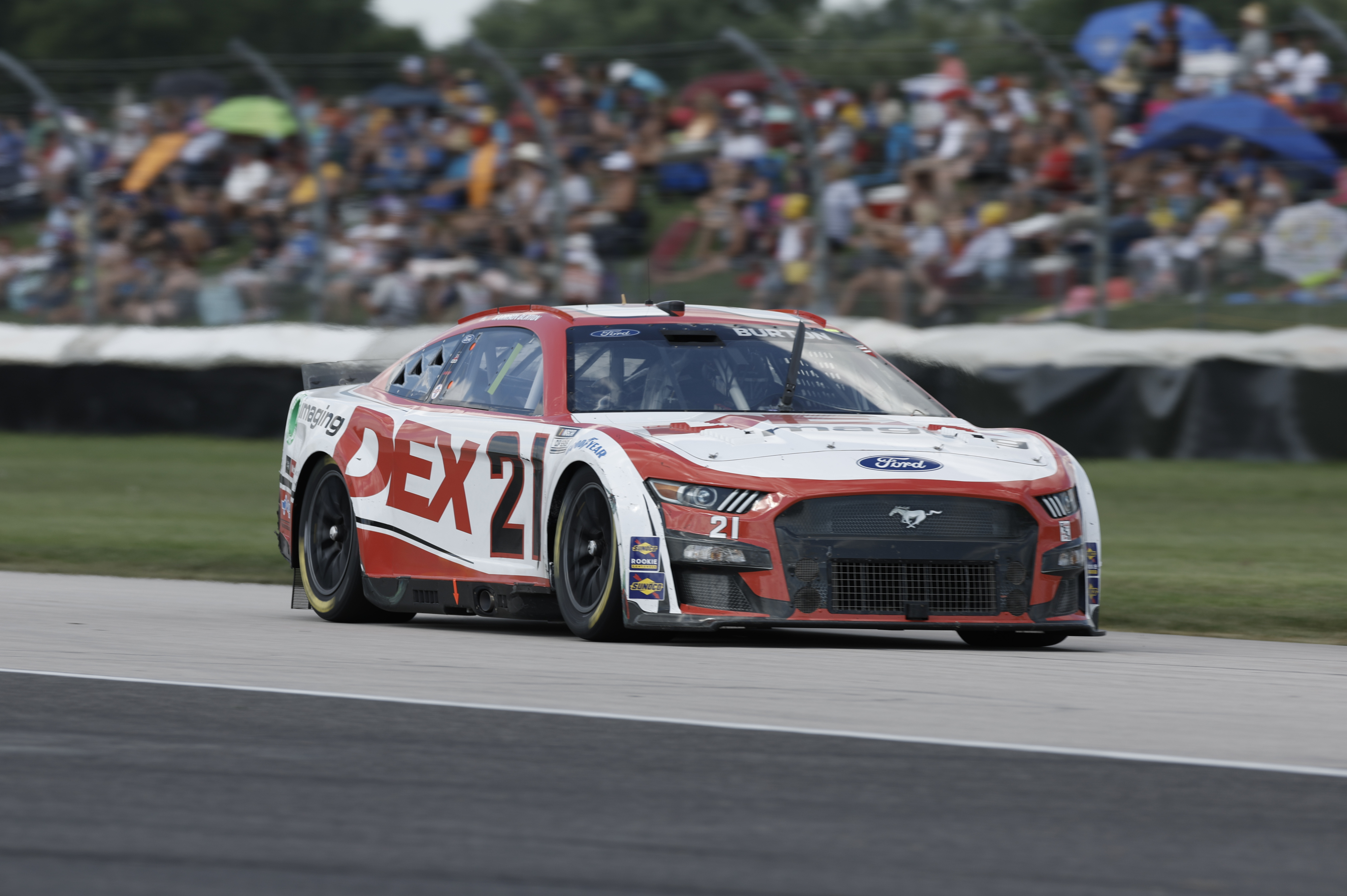 Harrison Burton, aboard the No. 21 DEX Imaging Mustang, struggled in the middle stages of Sunday’s Verizon 200 on the road course at Indianapolis Motor Speedway, then steered his way through two chaotic late-race restarts to score a Cup-career-best third-place finish.

“We tried to stay out for Stage points and more people stayed out than we thought and got buried there,” Burton told reporters after the race. “Then I made a mistake and got into [Cole] Custer.

“I was spun out at one point. I was all over the place.”

Then he got a break when the team’s pit strategy put him in position to make a late-race charge.

“It was a tough day for me and then got some new tires there before the last caution and started picking guys off and just got in a good place for those restarts…” he said. “The big thing was being on the inside for those restarts and kind of plugging the middle and missing the chaos.”

Burton started the race from 13th place and was in the top 10 after one circuit around the 2.439-mile, 14-turn track.

He ran around the top 10 for the remainder of the opening 15-lap Stage and ended that segment in ninth place, earning two bonus points.

He steered his DEX Imaging Mustang to pit road for service during the ensuing caution period and rejoined the race in 25th place. He made his next pit stop with three laps remaining in the second Stage and that put him 30th for the next restart.

The third segment of the race saw crew chief Brian Wilson and the DEX Imaging crew employ the pit strategy that put Burton in position to move forward in the race’s final laps.

The final stop came with 19 laps left to run.

As others ahead of him pitted he moved up to 19th place and was running there when the caution flag flew for debris on the track with five of the scheduled 82 laps left to run.

On the restart, as drivers ahead of him began bouncing off each other, he worked his way to ninth place when another incident sent the race into Overtime.

The final restart saw him once again steer through spinning cars to take third place, which he maintained over the final two laps to get the first top-five finish of his Cup career.

Burton and the No. 21 team now head to Michigan International Speedway for the FireKeepers Casino 400.

About DEX Imaging
DEX Imaging is the digital document imaging division of Staples, the world’s largest business solutions provider. DEX sells and services the broadest selection of copiers, printers and data management solutions, such as HP, Konica Minolta, Canon, Kyocera and numerous others.

DEX Imaging has been the recipient of virtually every industry award since the company’s inception, including the JD Power & Associates Award for Best Customer Experience, the prestigious ProTech Service award by Konica Minolta, the Diamond Premier Dealer Award by Kyocera, and the Elite DEALER Award by ‘ENX’ magazine. Other accolades include being named ‘Best Place to Work’ by numerous business journals in the markets DEX serves.